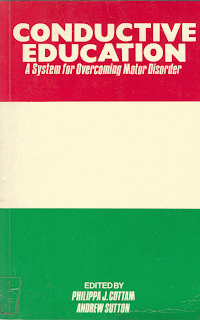 Background
This book, the first comprehensive overview of Conductive Education in English, was written mainly because Cottam and Sutton, as working academics, needed to publish a book. Regular publications such as journal articles and books are expected of those working in the world of academe. Both having recently come across Conductive Education, and considering it an important system for those with motor disorders, it was an obvious choice for both and resulted in this collaboration.
It was published in 1986, twenty three years ago and was consciously an ‘academic book’. The publisher, Croom Helm, was an adventurous young publishing house that would take on unlikely subjects in the expectation that some at least would be runners and accepted it straight away.

It was hoped that it would attract academic interest in the project proposed by the Birmingham Group and pre-dated the Foundation for Conductive Education by nearly 12 months. In the event Standing up for Joe ( the BBC TV documentary) created a wider interest and sales of the book rode on that. The proper academic interest never really took of, but lots of parents and practitioners bought the book (though it was not really directed to them).

Sales were good for an academic book of that kind and it went to three reprints in a couple of years. In 1988, Croom Helm asked whether the authors would permit a fourth, but they declined. Two years on into the project Cottam and Sutton already knew so much more about Conductive Education , so different from what all previous people had known, that they knew it to be not just out of date, but wrong in important respects.
Contents

To quote from the back of the book:

It is divided into three parts with contributions from Andrew Sutton, Philippa Cottam, Jayne Titchener and Veronica Nanton.
Part one looks at the social-historical context and the practice as observed by Andrew Sutton.
Part two covers the practice outside Hungary and discusses the suitability of Conductive Education as an approach for the physically and mentally handicapped.

Part three looks at the problems and prospects in bringing it to the West and includes a chapter on Parkinson’s disease.

A bibliography of all relevant known publications is included and many of these are still referred to today.

It wasn’t widely reviewed. Academics tended to like it. professionals less so, but numbers were too small to generalise. Copies of these reviews are available in the National Library of Conductive Education.

This book is only one academic review of the whole phenomenon and is now over twenty years out of date, but holds a very important place in the development of knowledge about Conductive Education outside of Hungary.

The first, non-stop, around-the-world, jet flight came to an end at Riverside, CA. The plane was refueled in mid-flight by huge aerial tankers.