I am very pleased to announce that a new book has been published by Conductive Education Press. This is entitled András Pető and can be found at

A brief description of this book is as follows:

András Pető was a healer. In difficult and tumultuous circumstances in post-War Hungary, out of a personal practice of movement therapy with paralysed children and adults, he developed a pedagogic method from which modern-day ‘Conductive Education’ proudly traces its origins.
But who was he? What did he actually do? Indeed, what was his method?
Surprisingly little has been generally known about András Pető, even amongst his most ardent followers. In his life he cultivated an aura of mystery; in death he became a myth.
This book offers personal recollections from close associates and colleagues, some previously published, some specially written for this publication, along with a range of attempts to sum up and understand his life and work. Originals were written in German, Hungarian and English. Here they are presented in English.
Also here are detailed course-notes for his students, written at the pivotal time that his movement therapy was emerging as conductive movement pedagogy, plus a short collection of his poems that reveal so rawly some of his own mental anguish. Written in Hungarian and German respectively, these too are presented here in English translation, along with facsimiles of their originals.
This book should help disperse some of the myth around András Pető, so that its readers may begin to create their own critical appreciation of who he was and what he did. It is hoped that it will also help readers question and challenge what they already understand about András Pető and his work, and how this relates to present-day practices and the invocation of his name.
This book is no final statement. The field of Pető Studies awaits further, extensive cultivation

With Forewords by Judit Forrai, Jo Lebeer and Reuven Feuerstein 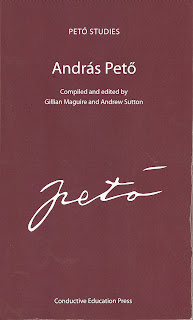 Copies can be ordered fromhttp://www.blurb.co.uk/bookstore/detail/3575875

I am now back to adding material to the virtual catalogue of Conductive Education which can be found at http://www.e-conduction.org/?page_id=115

It is good to get back to doing ‘library’ tasks again after spending much of my time on Conductive Education Press projects and dealing with other personal issues.
There are now nearly 400 items in the catalogue and I do have a list of things, built up over the past few months, which should increase that quite a bit. These consist of papers, conference reports, brochures etc. I believe that a new journal will be published in November and that will go in too if its available via the Internet.
If you are aware of anything new going up, or about to, on the Internet, please do let me know. I do regular searches for such things but may have missed something.

The three crewmen of Skylab II landed in the Pacific Ocean after being on the U.S. space laboratory for 59 days.