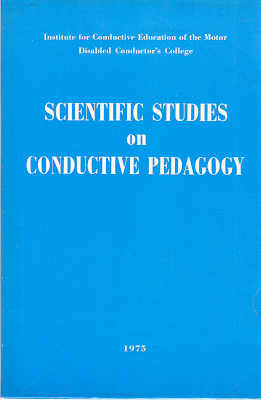 Akos, K., ed. (1975) Scientific Studies on Conductive Pedagogy. Budapest: Conductors’ College.
This book was published in 1975 by the Institute for Conductive Education of the Motor Disabled Conductor’s College ( now the Peto Institute), edited by Károly Ákos and translated by Peter Szoke. It was the first one in English.This is not a very well known text and why it was produced I do not know, but perhaps there is a clue in the introduction by Hári Maria. She had read papers at meetings and conferences in the West since the 1960s and might have felt that she had not been fully understood. In the introduction she says:

The importance of playing in conductive pedagogy…F. Székely

Therapy or teaching? A discussion on rehabilitation

The rehabilitation of motor disorder patients in statistics

A number of photos are included along with a short bibliography.

As to availability, I am not sure, but suggest that contacting the Peto Institute would be the best way of obtaining it as they may still have some copies for sale.

Several copies are in the National Library of Conductive Education.

I have been sent an item by Susie Mallett about Librarians entitled Librarian literature – top ten books written by librarians, which was taken from a newsletter, The Avid Reader produced by Abe Books.
http://www.abebooks.com/books/Newsletters/100322/000-librarC.shtml?cm_mmc=nl-_-nl-_-000-librarC-_-h-online This list is very interesting. It includes the well known librarian Philip Larkin, plus others not so well-known. In fact I did not know that Madeleine L’Engle, Ann Tyler and Jorge Luis Borges had been librarians. Missing from the list are John Braine, Lewis Carroll, Marcel Proust and Benjamin Franklin who could easily have been included.What a wonderful collection of people who have achieved so much in very different ways and as I cannot really claim that writing this blog makes me a writer in quite the same way, I am very pleased to be associated with them as a librarian too.

I have been sent some more changes for the US listing of centres by Kasey, and these have now been made.

I was quite surprised to discover that several centres were no longer operating – Beginning Steps to Independence in California, The Jenny Rose Center in Pennsylvania, and The GRACE Center in South Carolina, but new ones are being set up – Center for Developmental Differences in Virginia and Brighter Beginnings through Conductive Education in Ohio. It is a shame that those who have worked so hard to open, run and maintain CE services have to close them down, especially when the services have been available for several years.Thank you very much, Kasey, it is much appreciated and just what is needed to keep me up to date. If anyone else knows of other changes or inclusions that need to be made, please do get in touch.

I have just discovered that the Pető Institute has a new English version of its website which looks very good, clean and fresh with a white background. I have no idea how long it has been up on the Internet.http://www.peto.hu/en/

I have had a look around but was unable to find a list of publications and information on ordering these.

General information about the Institute can be found under the headings of Centre for Development and Conductive Care, Conductive Kindergarten, Conductive School, Adults’ Education Unit, College for Conductor Training and Mária Hári Library and Regional Resource Centre.

The introductory paragraph to the Library section says

Funds from the European Union and the National Development Plan in the frame of the Human Resources Development Operational Programme have made the refurbishment of the Mária Hári Library and Regional Resource Centre possible.

The Library holds thirty thousand volumes on a variety of subjects, not just Conductive Education. A brief description of its contents given.

The piece finishes with

A newsroom, a study, light and comfortable rooms for readers and a children’s corner are expecting visitors day by day.

I am not sure if this means the library is now open to all and not just the Institute’s staff and students. Perhaps someone will confirm it for me.

A museum devoted to the history of Conductive Education and Maria Hari’s life is also on the first floor. Certainly worth a visit if open access is possible, if you are ever in Budapest.

I felt sad and angry. Angry that the Library would no longer be a living library as there would be no-one with the time and expertise to search, find, beg for ,and add material to it. Keep it growing. As far as I know those assigned to looking after it have other responsibilities and therefore little time, if not none at all, to devote to it. Shame. The systems I put in place mean that basic services of issuing and returning items can be offered to the service users, students and staff at the Foundation. It is the only Library in Conductive Education that is open access (I know that the opening hours have been reduced to term time only by appointment) and applications for new membership not being accepted. Access is possible but not in the way it was. Shame.

I felt sad as I thought that after eighteen years plus in Conductive Education I was leaving it and taking my knowledge with me. I did not think I would be able to keep up this blog, that it would be impossible without the Library around me, but I have managed it and hope to continue. A number of people have written to me with enquiries which I have responded to and the number of hits, now 10,487 as I write this, has been quite satisfying with an average of 200 a week.

More time can now be spent on preserving the knowledge and information on Conductive Education through publishing and I am part of the Conductive Education Press publishing house. www.cepress.org The first book, Just Do It, came out in December and sales have been steady. There are plans for several more books, so its future is looking bright and exciting.

I would like to thank again those who wrote to me a year ago saying such kind and complimentary things and also those who signed the petition.

The support of several people over the first six months helped enormously. This meant so much and encouraged me to stick with Conductive Education, determined to work for it in new (if unpaid!) ways.

I started preparing this posting a week or so ago and since then I have had a surprising communication which means this extra paragraph. I received an email informing me that I had been nominated and accepted for the award of Honorary Conductor to be presented at the World Congress in Hong Kong later this year. Apparently a letter had been sent through the post in December 2009, and I had not received it, but a copy of this from Professor Schaffhauser, written on behalf of the Andras Peto Institute of Conductive Education and Conductors’ College Senate, has just arrived. Naturally this was completely unexpected and left me at sixes and sevens, as they say. Of course I was delighted to accept. I am now waiting for further information and may go to Hong Kong. I did go there as a child and have some happy, if slightly vague, memories of the trip.

It just goes to show how life can change in a very short time – and I wonder what will the next twelve month bring!

Is this a first?I have just read a news report of an exhibition of photographs taken by professionals at a Conductive Education centre in the UK.

The Megan Baker House Photographic Exhibition opened in Worcester Cathedral yesterday with photos of the participants and their families taken during sessions at the Centre. It will remain there until Sunday 21 March.

It is hoped that the exhibition may move to other venues.

I am not aware of any other such ventures, so please let me know if there are any, or have been any.

Jackie Robinson became the first black player in major-league history. He played in an exhibition game for the Brooklyn Dodgers.