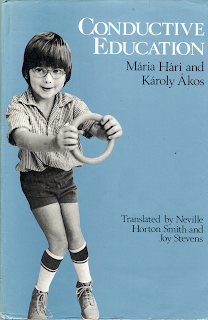 This is an English translation by Neville Horton Smith and Joy Stevens of the original Hungarian book published in 1971 as Konduktív Pedagógia. It is the most frequently cited title and considered the standard text by many, although it disappointed a lot of people on publication because it was mainly medical in content.
Conductive Education was planned as the first in a series covering the background and basis for the practice of Conductive Education, but as far as I know no further parts were published. About two thirds concentrates on medical aspects – the brain, neurology etc before getting down to explaining how Conductive Education can help. These chapters cover such aspects as the group, facilitation, observation and task series.

A large number of photographs are included in an appendix , pages 233-375, showing certain tasks used in the groups for the different types of cerebral palsy.
This book is now out of print but is held in the National Library of Conductive Education and also a number of second-hand copies are available from Amazon or Abebooks at a range of prices.

The U.S. and Communist China agreed to establish liaison offices.